Controlling the ‘Smart Home’ With Tablets and Smartphones 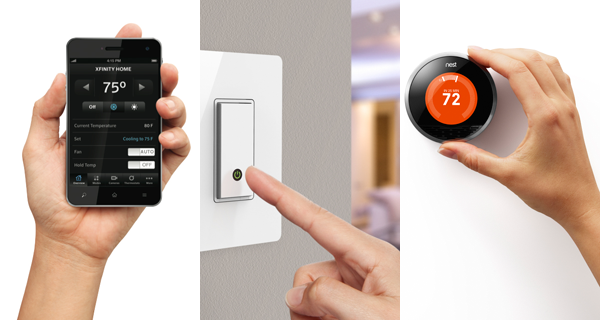 From left, the smartphone app for Xfinity Home, Belkin’s WeMo light switch and the Nest thermostat.

A few years ago, I bought a $25 wall switch that could automatically turn my porch light on at dusk and off at sunrise, hoping to make my 1920s-era home a bit smarter.

Setting the timer on the switch was so baffling — it has buttons the size of a small seed — that I ended up doing it once and never fiddling with it again. Now the porch light on my home in Seattle goes on every night before 5 p.m. — great when it gets dark during the region’s bleak winter months but rather unhelpful during the summer when it stays light until well after 9 p.m.

That smart switch made my house dumber.

Fortunately, home automation technologies like lighting and climate controls have evolved in the last few years to become smarter, and more usable, in part by allowing programming from smartphones and tablets. Most now use wireless technologies so they do not require ripping out walls. Here is a sampling of the options available, from single-task devices to more sweeping solutions for controlling all the systems in a home.

WARMING UP While a home automation project can quickly expand to the most extravagant budget, many people have more narrow goals, like saving money on their heating bills.

One way to do that is through programmable thermostats, which have long allowed people to create schedules for automatically adjusting the temperature in their homes. I have had one in my house for years, but, like my light switch, creating schedules for it is so tedious that my family ends up manually turning the heat up and down. When we forget to adjust it, we heat our empty house.

I recently installed a thermostat from Nest — a start-up founded by Tony Fadell, one of the creators of the iPod and iPhone at Apple — that is designed to learn heating preferences automatically over time so it does not have to be programmed. After a few days of noting when my family manually turned the heat down at night before bed and up in the morning, it began making those adjustments on its own. A motion sensor in the thermostat tells it if someone is home (assuming it is mounted in a high-traffic area) so it regulates a home climate more efficiently.

One of my favorite things about the thermostat is that it is connected to my home Wi-Fi network so I can adjust the heat through a Nest iPhone app from anywhere, whether I’m lying in bed or sitting in a taxi on the way home from the airport. It took me less than 20 minutes to install the thermostat, which Nest says is compatible with nearly all low-voltage heating systems and can lower heating and cooling bills by 20 percent. I haven’t had it long enough to confirm that.

With its elegant display and steel bezel, it also looks like a piece of jewelry on my wall, and at $249, it should. Nest hints it could get into other kinds of home automation down the line, but for now it is just doing thermostats.

BRIGHT IDEAS Light controls can also add a sense of comfort and security to a home. In addition to my $25 wall switch, I’ve long used cheap digital light switches from my local home improvement store to flip on lamps and Christmas lights automatically when I’m away from home.

Last year, Belkin began selling WeMo, a line of products that use Wi-Fi to allow control of household devices from an app on any Apple iOS device. Lamps, space heaters and the like can be plugged into the $50 WeMo Switch, which in turn plugs into an ordinary power outlet.

From my iPhone, I was able to remotely turn a lamp off and on while away from home, and to create a schedule for lighting my house more easily than on conventional timers.

A $100 version of the switch comes with a motion sensor that can turn lights on when it detects someone occupying a room. It is even possible to use the motion sensor in conjunction with a Web service, Ifttt, to set up rules that set off an action — like sending a text message when a door is opened.

This summer Belkin plans to release a wall switch that extends the same capabilities to lights that are hard-wired in homes.

A more whimsical product is Hue from Philips, an LED light bulb with wireless controls built in. The bulbs can be scheduled to light up, shut off and dim from an iPhone and iPad, and even to change colors.

Hue emits 600 lumens, equal to about a 50-watt incandescent bulb, which will not be bright enough for many uses. A Hue starter kit with three bulbs and a wireless base station for controlling them sells for a hefty $200.

THE WHOLE HOME Some homeowners have much bigger ambitions of creating whole-home systems, where home automation, security and entertainment are all integrated and controllable from a single interface. These systems, from companies like Crestron and Control4, are typically for bigger homes, require professional installation and can become very expensive. Control4 says a starter system begins at around $1,500, but bigger projects can easily jump past $5,000.

A number of national providers are also promoting home automation features aggressively as part of broader security services, which include round-the-clock monitoring for burglaries, fire and other emergencies. I’ve been bombarded for months with fliers from the cable provider Comcast for its Xfinity Home service, which it is now heavily marketing across the country

Comcast has two options, priced at $40 and $50 a month, that include motion detectors, window and door sensors, touch-screen controllers for operating the system and round-the-clock monitoring by Comcast. The more expensive option comes with a broader set of home automation devices, including light controls, a thermostat and surveillance cameras. Additional gadgets can be tacked on, like water sensors for detecting leaks from a hot water heater and carbon monoxide detectors, but that costs extra.

Another company, Vivint, has a similar set of offerings that start at $58 a month for a security service with basic energy management features like a programmable thermostat, and a $69-a-month tier that has more complete home automation options like automatic door locks. Comcast charges one-time fees from $99 to $399 with three-year contracts for service, while Vivint’s home automation packages have one-time fees of $149 to $199 with five-year contracts.

Both also offer services that allow homeowners to control their systems from smartphone and tablet apps. One advantage these systems have is that they can be programmed to work together. A homeowner can set the thermostat to lower the heat when the security system is armed, for example, while opening a door can turn household lights on.

Mitch Bowling, a senior vice president at Comcast, said stand-alone devices like the Nest and WeMo were not as flexible as a comprehensive security and home automation service. “Those don’t work together; they don’t talk to each other,” he said.

A version of this article appeared in print on March 28, 2013, on page B8 of the New York edition with the headline: Wireless Controls Help Bring The Smart Home Closer to Reality.